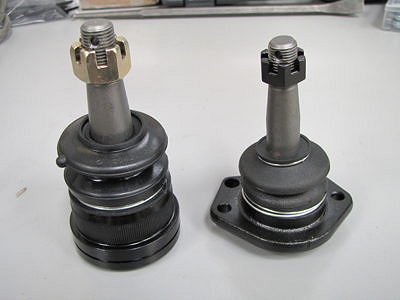 Second gen Camaros are considered to have improved suspension geometry over the first gen Camaros. While the second gens do have improvements, the camber curve is about as poor as a first gen! Extended shank ball joints can increase negative camber gain and improve handling. Expect an agressively driven Camaro to reach the -2.5" "height" level in the charts below when braking and turning into a corner. Simply adding a .5" taller upper ball joint adds a full 1 degree of negative camber gain! Most Camaros will have a good 3 degrees of body roll so a static setting of -1.5 degrees of negative camber is just enough to keep the wheel vertical to the pavement. A camber gain goal of .7 to .8 degrees per inch of bump travel is common.

Some important points are:

vehicle height: numbers with a minus "-" sign indicate chassis in "bump" or "dive" position.

Test car had Hotchkis front coils at their normal ride height which will be lower than stock.

bumpstops were hitting between -2.5" and 3" and were removed for this test.

I did not include the "Toe" bumpsteer data, I thought it would be confusing to include it here. IF there is any bumpsteer on a second gen Camaro, it is almost always toe-in during bump. The idler arm can be loosened at the frame bolts and rotated to raise or lower the center link by a very large armount. The steering box can be movred the same way but is more limited in center link height change. A stock Camaro is best set with steering box pitman end at it's lowest point, idler arm should be rotated to level the center link. This results in nearly zero toe in gain. With .5" tall upper ball joints, raise the steering box pitman end as high as possible, idler arm, raise to level the center link. With tall upper and lower ball joints, raising the idler arm to max will result in fairly low bumpsteer numbers, but the driver's side will be too low and have some toe-in bumpsteer that can't be adjusted out. It is probably 1/8" toe-in at 3" of bump which sounds like a lot but is not noticeable if the passenger side is raised fully. We ran the test car below with Power Performance tall upper and lower balljoints and steering linkage optimized in this way, and all reports are good. Mary said "I want this on my car". 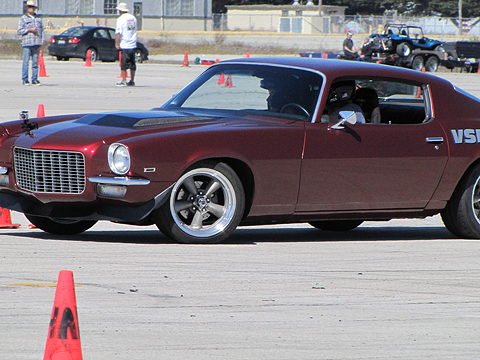 Here is a youtube video of the car autocrossing

You can hear a bystander say "How does she do that!"