First Gen Camaros
Links to my other pages

Here are some old photos of my 67 Camaro

LINKS WITHIN THIS PAGE: 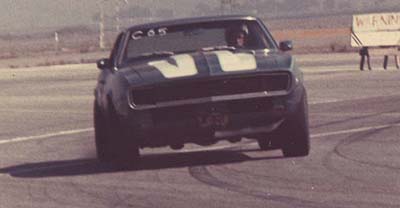 In those days, Ernie Irvan used to Autocross his Dune Buggy there. He and his dad, Vic, belonged to the Luv Bugs dune buggy club. The dune buggies were banned from playing on the beaches on Monterey Bay, so they turned to Autocross.

I was President of the Monterey County Camaro Club. And joined the Pebble Beach Sports Car Club

My Camaro was my first car, and I've owned it since new, October 1966!

It was a 327 Rally Sport with the 275 hp and Saginaw four speed, 10 bolt rear end.In this photo, the car is exiting the turn and under full throttle. The front has lifted up and is transfering weight to the rear. At this point the front camber curve is not a factor. 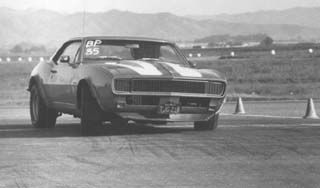 This is what happened when I added 8" wide race slicks on Corvette steel wheels. Note the car is leaning a lot, and the rear is raised, the outside tire is cambered out and overloaded, the car is understeering badly. 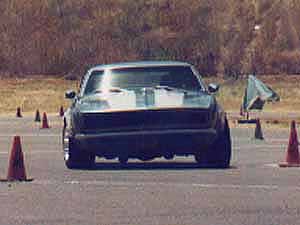 This is a later photo. I'm now up to 10 inch rims on the front. Notice the car is leaning just about two degrees, and the outside front tire is nice and flat. The tires I'm running here were front tires off Al Holbert's IMSA Monza.

By then I was running a 350 LT1 with a cam and headers, Muncie four speed and 4.56 gears. This was taken at the Cal Expo state fairgrounds, we ran the "access road" I hit 105 mph on the straight! After a three lap run, (one warmup, two timed) I turned my front rotors purple. It was about 105degrees too. 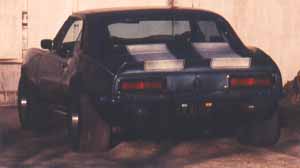 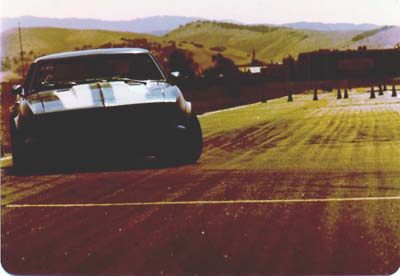 This is just before I started cutting on the wheelweells. aaah! the good old days!

This is a closeup view I had taken to see if my outside ft tire was flat on the pavement. Unfortunately, it's too dark to see! about 1974. And I began running eight inch racing slicks.

I tried copying the 70 camaro stripes by tapering them. I put a 69 bumper on the car, I had to cut it in the center and weld it back together to make it fit. 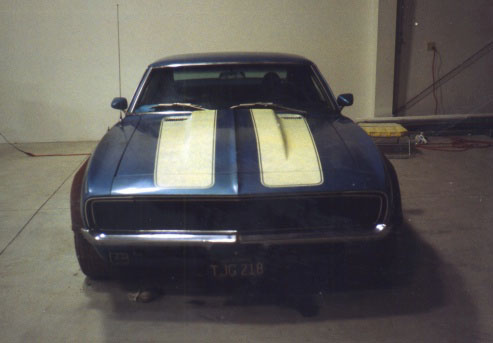 Above is the last photo of my Camaro I have. This was just before I took it apart for rebuild. I cut a 69 bumper apart and narrowed it to fit my car. 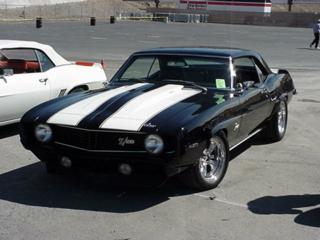 He has 16" American type wheels on the car. 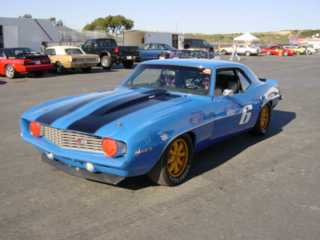 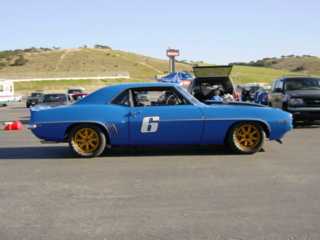 Compomotive wheels that look like Minilite vintage wheels. He has the JL8 four wheel discs, which are badly needed at Laguna Seca.

Owned by Herb Adams, this is competing at the SCCA Solo II Nationals at Salina, KS 1983

In 1983 I drove my first third gen F body. It was owned by Herb Adams and was known as the "SHOOTOUT" car.

Hot Rod magazine held a contest between a Guldstrand tuned Camaro, Herb Adams tuned Firebird, and a Maier Racing Mustang. The first SHOOTOUT used second gen cars and they were tested at the drags, slalom, and Willow Springs Raceway road course. This car was used in the second SHOOTOUT.

When the contest was over Herb Adams invited me to drive the car at some autocrosses and explore the autocross potential of the car. After I drove it a couple of times Herb tried some of our suggestions and some of his own, which made the car better.

I wound up running the car at the SCCA autocross national championships in Salina, KS. where I finished eighth in the new street prepared class, a 1970 LT1 Corvette won.

Upon returning to California, we went to see Herb Adams Can Am car run at Sears Point. It was an unusual car in that it had the engine and trans on one side and the driver on the other side with a huge venturi in the center of the car! 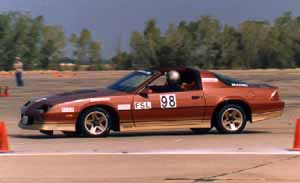 SCCA national autocross, 1988 finished 5th in F-Stock with 50 competitors in the class.

My wife, Mary is driving, thus the FSL on the car. 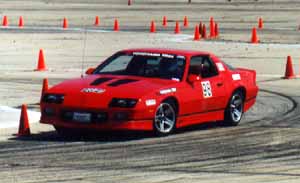 Note the tire deflection on the rear portion of the rear wheel. We showed up and had four types of new tires to select from. I chose the stickiest ones, but they were vague in steering response. Not a good time to be experimenting! 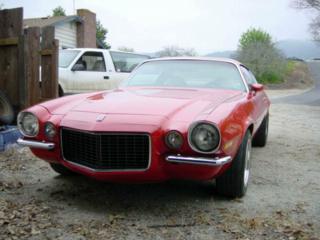 Just got it, needs work, lots of little things.

COMING BACK FROM RETIREMENT

This is the subframe out of my 67, undergoing conversion to a Richmond 4+1, transmission. I used a turbo 400 transmision crossmember for a cleaner installation.

The shifter was moved down, forward, and to the right, to fit my factory console. I used the factory holes in the subframe. My Camaro didn't have the two exra frame holes to attach the closer spaced T-400 crossmember. I added a little tab to the rear of the crossmember edge for the hole. 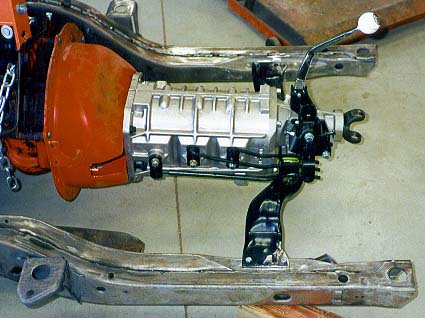 Click on Photo or HERE to get more info. 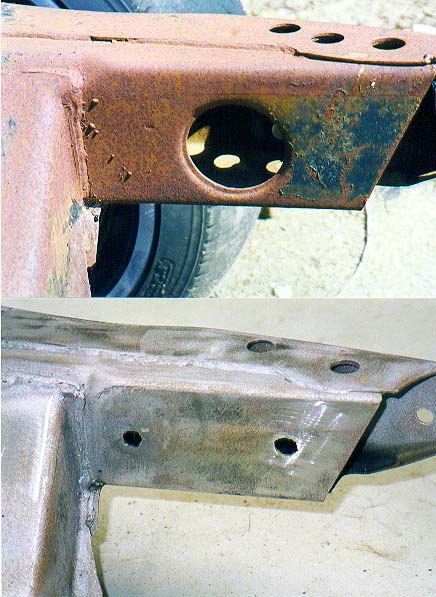 This photo compares my early 67 Camaro LA built car, (lower). With a later 67 frame (top) I have never seen an early Camaro without the frame horn holes like my car.

The two smaller holes I drilled for a tow bar. 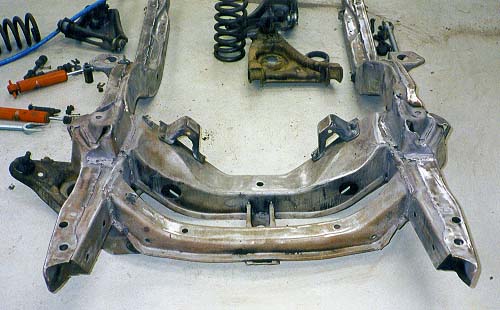 Note: lack of holes in the frame horns. Also, no raised area around the center hole in the center of crossmember where the six cyl engine mounts.

This is an Oct 66, Van Nuys CA built Camaro

Here is a wiring diagram for 67 Rallysport headlight doors. 172K.jpg Thanks to Mark Canning for sending the diagram to me.

Links to my other pages