Vintage Can Am Racing

VINTAGE CAN AM 40TH ANNIVERSARY AT ROAD AMERICA JULY 2006

It was originally raced by John (Buck) Fulp. read about the History of my car here. 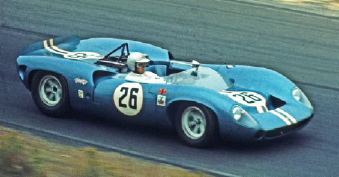 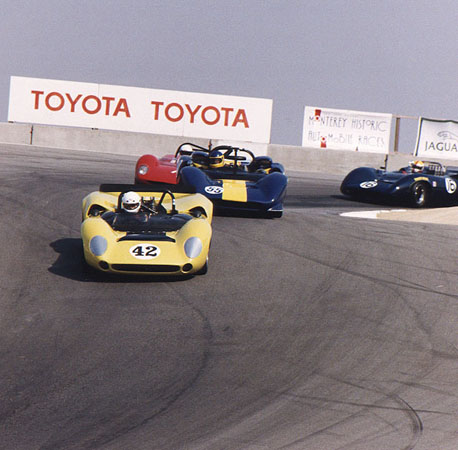 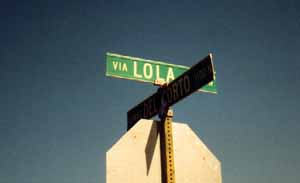 The Corkscrew at Laguna Seca CA

Leading three other T-70's on the first lap.

My car is a MK I, the MK III's had no headlights and used more aluminum in their construction, making them about fifty pounds lighter. 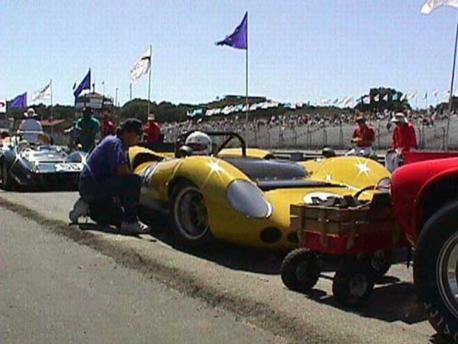 On pre-grid at the Monterey Historics

Laguna Seca CA. Gary Miller, (in blue ) started racing a Lola T-70 MKIII coupe around the same time I did. He is currently preparing a March GTP coupe for vintage events. 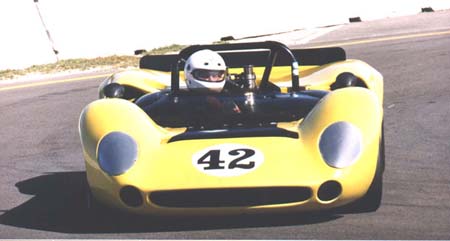 Second gear is best, with first gear you have to shift before the car is out of the turn. 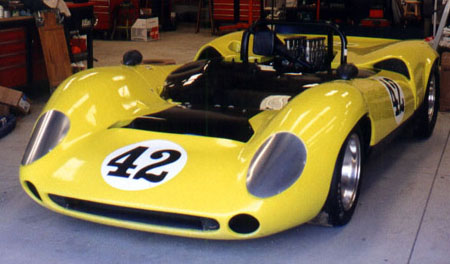 This is a nice 3/4 view of the Lola at home. The neatest thing about a Can Am car is the passenger seat. This is one of the fiew really fast cars that has the capability of taking a passenger along! In it's time Can Am cars were nearly as fast as Formula one Cars, so they provided a special fiew passengers with quite a thrill! 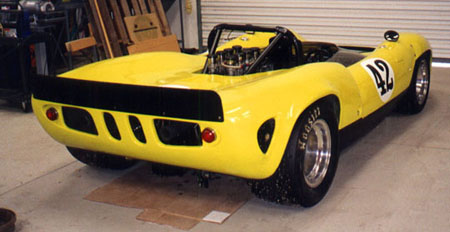 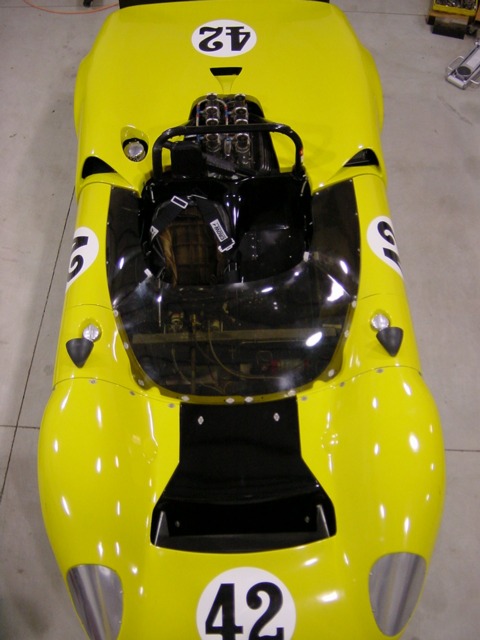 Here is a new overhead shot of the Lola 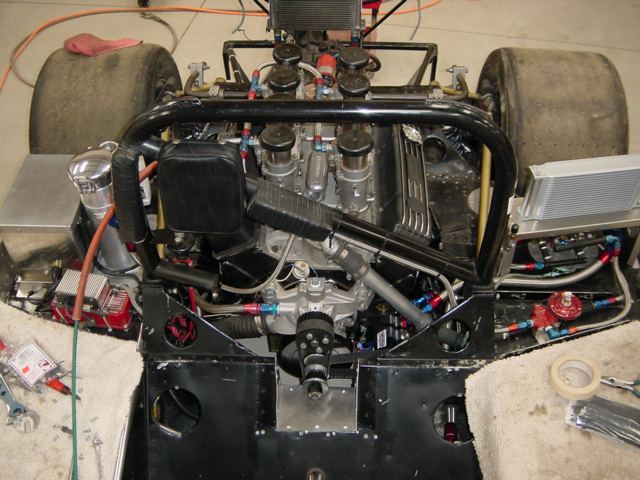 This is a shot of the engine and drivers seat in my T-70. You can see that I am almost sitting up against the engine!

That's the head rest upper left, and the sholder harness anchor below it. 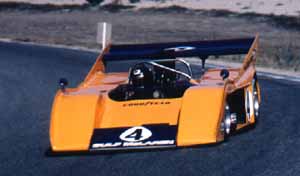 But, The M-20 couldn't beat the twin turbocharged 1200hp Porsche 917-30 of Mark Donohue, so McLaren quit Can Am and went Indy racing. This car was the first to have the radiators just ahead of the rear tires with ducts leading into them.

My Lola represents the oldest segment of the Can Am class. The M-20 is the almost the newest. The Can Am ended in 1984. Killed in part by the energy crisis, and Porsche's domination of the class. 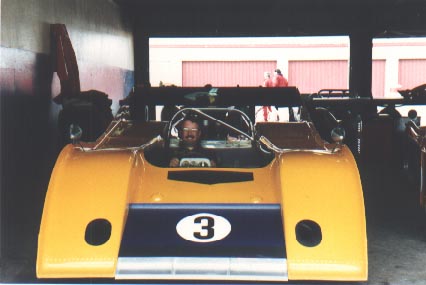 The Big Block Chevy can now put out around 900hp with modern heads and camshafts.

Wish I'd gotten a chance to drive that one! 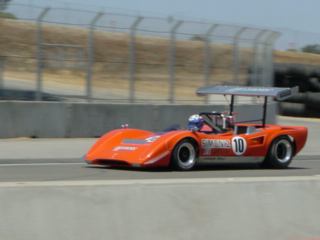 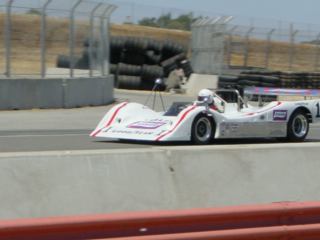 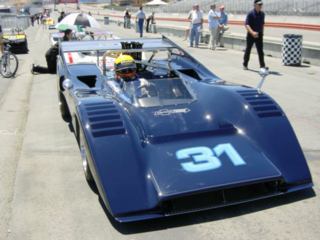 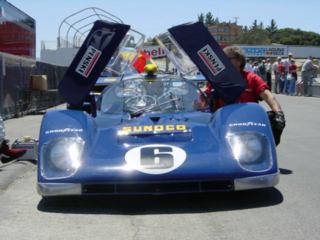 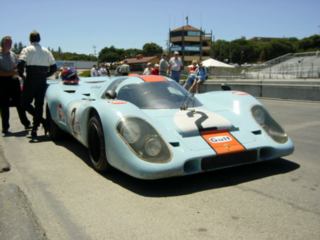 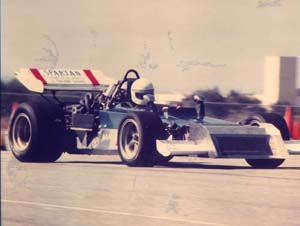 This is an Eisert Formula 5000 car. Jerry Eisert built about 8 of these, and only this one was a short wheelbase version for road racing. The rest were for Indy.

I autocrossed this car for a season, winning a local championship, and ran it at an SCCA Solo I track event at Laguna Seca CA. We ran a 350 engine with Weber carbs. I took the car to the Cambria CA,time trials held on streets laid out on a yet to be built subdivision, and set a track record that I don't think has been broken, it was about a mile long track, I spun the tires most of the way down the front and rear straightaway.

CARS MY FRIENDS OWN 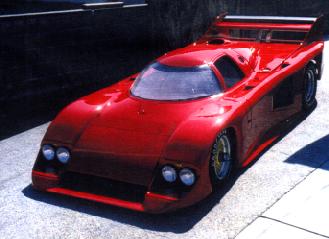 Just painted, June, 2000! (red of course) Gary has amazing talent for bodywork and paint, he is also an exelent mechanic.

He's a former winner of the Monterey Historic auto races in the GT class and a very talented car restorer.

This car was just purchased for vintage racing by my good friend John Church. Origonally driven in 1971 by Hiroshi Kazato. as #88, the car ran 9 Can-Am events in the US in 1971, and was maintained by Carl Haas, the Lola importer.

The engine is an all aluminum 454 with Lucas timed mechanical fuel injection and dry sump lubrication. Transmission is a Hewland five speed transaxle. Rear tires are 17" wide. 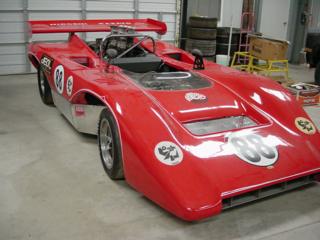 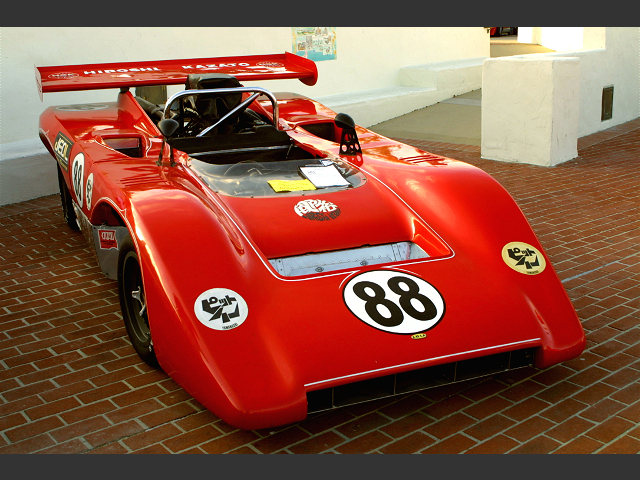 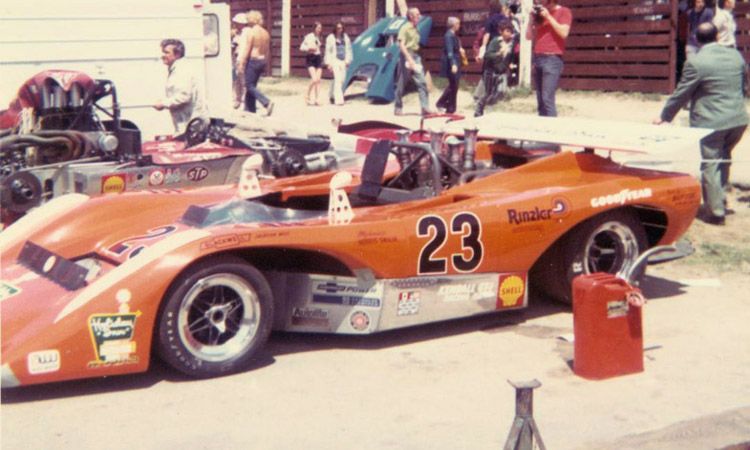 Here is a great link for more Can-Am photos: http://www.photoessayist.com/canam

Here is a new Can-Am history page with a forum, Chat, and much more. http://can-am.husted.cc/index.php

NEW! Need a new race car steering wheel? Have one custom made to your exact specifications. A vintage car needs a vintage correct steering wheel ! http://www.vintageracingsteeringwheels.com/

Links to my other pages